Welcome back to the Sustainability Dispatch!

The year ends with a bittersweet aftertaste in environmental terms. An agreement was reached in Sharm El Sheik, Egypt, at the UN 27th Conference of the Parties on Climate Change that promises to create a new fund for loss and damage for the least developed nations to pay for the already overwhelming consequences of climate change, as well as to reform Multilateral Development Banks and International Financial Institutions so that they can truly become enablers of the net-zero transition. Similarly, the 15th Conference of the Parties to the UN Convention on Biological Diversity held in Montreal in early December, provided a few glimpses of hope too, establishing as part of its agreement’s targets the protection of 30 percent of the world’s lands and waters by 2030. Yet, the last round of negotiations to agree on a Treaty for the High Seas (where it is, effectively, lawless) went sour earlier this year; subsidies for and the abatement of fossil fuels were not tackled in Sharm El Sheik’s agreement; and for the harmful subsidies that lead to overfishing—one of the largest threats to marine biodiversity and food security worldwide—no clear path to phasing them out was delineated in Montreal.

Natural capital is taking a more prominent role, however, ever since a 2020 World Economic Forum study revealed that more than half of the world’s GDP is dependent on nature in some shape or form. And as businesses are forced through regulations to assess and disclose their climate-related risks, they too are starting to realize many of the latter come from their business’s own dependence on natural capital and resources that are bound to change or decrease. This speaks to the need to see the biodiversity loss and climate crises more holistically, as one—not as two separate things. In this spirit, expect from us in 2023 a strong focus on ecosystems, on the link between climate change and ocean pollution, and on the role of the private sector in fostering and protecting our carbon sinks, from forests to wetlands to our Earth’s true carbon sinks—the oceans—.

DataMares, the science communication platform of the Gulf of California Marine Program (GCMP), co-hosted three discussion panels during the 36th International Book Fair in Guadalajara (FIL Guadalajara) this past November, as part of the “FIL is Science”. Our EC2 Catalina López moderated a panel on Science Diplomacy and guided a conversation with Dr. Gerardo Ceballos from UNAM, Dr. Micheline Cariño from UABCS, and Dr. Pablo Medina from UdeG on the importance of creating a vocal and active scientific sector that pushes for the use of knowledge to help solve society’s environmental problems. We also hosted two other panels with speakers that included Dr. Adrián Fernández from Iniciativa Climática de Mexico (ICM), Dr. Exequiel Ezcurra of UC Riverside, Dr. Octavio Aburto from Scripps Institution of Oceanography, amongst others. 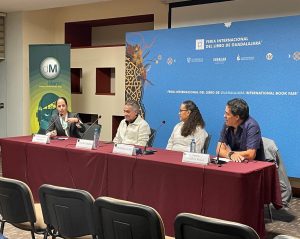 We are happy to share this primer on Climate Risks and Disclosures written by our Non-resident Fellow Soffia Alarcón Díaz and our EC2 Director Tania Miranda. Climate costs to physical infrastructure, industry, and economic output worldwide will add up to 1 trillion USD annually by 2040. As climate related-risks become more consequential and widespread, regulators face increasing pressure from investors and stakeholders to regulate companies’ emissions and climate-related risks. As such, these risks should be integrated into risk management and compliance practices. 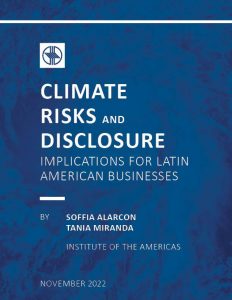 Latin America and the Caribbean will face important revenue losses from oil and gas royalties and other exports, as the global low-carbon transition makes headway. This transition will also bring shifts in asset values and higher costs of capital if countries do not address potential risks now. On the other hand, opportunities and upsides for first-mover entities that identify and manage these risks can be plenty—speaking to the need to build capacity now. Read the full report to learn more on why the region’s businesses must start to identify and manage these risks, even if governments are behind on regulation.

Furthermore, to celebrate eight years of promoting access to scientific information, the GCMP’s dataMares published a book showcasing this collaborative science communication initiative though a sample of its most representative work. The anniversary celebrations included several book presentations in Mexico City in October, and at FIL Guadalajara, in November. Moderated by Marisol Plascencia of the Centro para la Biodiversidad Marina y la Conservación, panelists included dataMares’ Art Director, Luis Miguel de la Cruz, original creator Dr. Octavio Aburto, and renowned Mexican writer Hernan Lara Zavala—who spoke about the close relationship between science and literature and how the ocean has, throughout history, been a source of inspiration and curiosity for many writers. 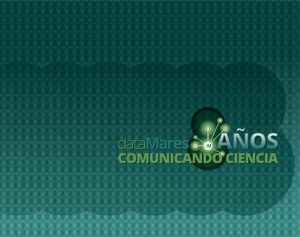 The book is available to buy online with the Fondo de Cultura Económica and the University of Guadalajara’s Librería Carlos Fuentes.

The EC2 program is happy to announce that Carlos Eduardo Correa, former Minister of Environment and Sustainable Development of Colombia, will join the team as a non-resident fellow beginning in January 1st, 2023. Mr. Correa was formerly Vice-minister of water and sanitation; Mayor of Montería, in the north of Colombia; and participated in the private sector in multiple roles. He was named Champion for Nature by the World Economic Forum, amongst other distinctions. Read his full bio here, and be in the lookout for the awesome work he will be helping us with! 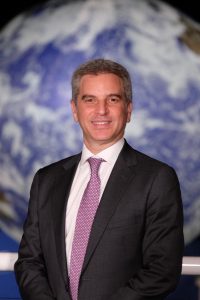 The geeky, yet cool tool of the month: The climate crisis explained in 10 charts

Explore this article by The Guardian to see charts from the seemingly inexorable increase of carbon dioxide in our atmosphere, to the steep loss of Artic sea ice, to the impressive soar of global stock of electric vehicles from a few years ago to date. 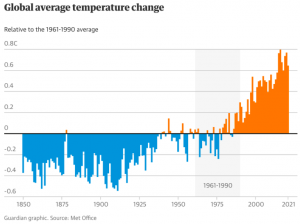 The Institute of the Americas’ Environment & Climate Change Program (EC2) strives to catalyze climate leadership amongst the private sector and local/regional governments in the Americas, to promote sustainable growth, tackle climate change and minimize environmental impacts in the region with the goal of protecting its rich marine and land-based natural capital.

You can explore other things the Institute is working on through our website and follow us on social media!

This is the fifth edition of the Sustainability Dispatch. Click here to view our previous edition!

Thanks for tuning in and please remember to subscribe so you see our newest updates in the next Sustainability Dispatch!