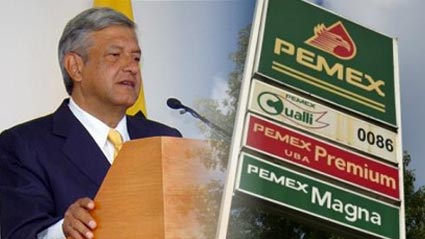 Despite photos of the president hugging babies and shaking scores of hands across the country, Mexico is not immune to the double whammy hitting major economies and energy markets: low oil prices and demand destruction due to the coronavirus. Indeed, for Mexico there may actually be a quintuple whammy if you layer on top of the two global trends three more particular ones at home: a recession and spiraling peso, plummeting oil production, and a massively indebted and fiscally imbalanced national oil company in Pemex.

But let’s focus on the fuels market and the “double whammy.” The good news is that, before this crisis, Mexico had made significant progress in liberalizing and diversifying its fuels market and infrastructure.

The attraction of a major market opening and one with important growth projections led to attention and investment commitments. In energy sovereignty terms, the market also demanded massive infrastructure investment to ameliorate Mexico’s tenuous storage capacity of a mere three days of supply. By comparison, the United States has fuel inventories on the order of one month of demand.

Companies such as ExxonMobil, BP, Chevron, Marathon, Valero, and others entered the market with gusto. Many implemented massive logistics infrastructure to move product and supply their facilities. Indeed, ExxonMobil’s self-supply, largely on the back of the Kansas City Rail system, catapulted them to second behind Pemex as the country’s most important fuel supplier. And the ability for the Bajio region to navigate the fuel crisis of early 2019 was largely due to these developments.

Yes, 2019 saw a lag and slowdown in the approval of permits from energy regulator CRE. But, keep in mind there have been 40 permits issued for new facilities that will offer on the order of 30 million barrels of storage capacity according to figures from OPIS/IHS Markit. As of late 2019, there had been at least five marine terminal projects slated to open in 2020 and overall infrastructure that would effectively double the volume of gasoline imports by private firms. The fuel retail business had seen a marked change. The proliferation of private brands across the country had grown to around 1/3 of all stations according to OPIS/IHS Markit.

And, yes, the change in governance and slate of commissioners at the CRE, along with a request – perhaps directive is more accurate – from the government to reverse the market-opening rules set in motion under the previous administration in Mexico delayed projects and has impacted investor confidence and the future of the fuel market liberalization.

The so-called asymmetric regulations for the fuels market had sought to create a more competitive market and playing field. President López Obrador argued that rather it was a bullet aimed at Pemex’s heart. Thanks to the changes in December, Pemex is no longer obligated to follow the regulations and can revert to its monopolistic practices for fuels sales. Further, calls for boosting storage for enhanced energy sovereignty were rejected, and in late 2019 the current administration removed a mandate that would have increased inventories.

But back to where we are today – the double whammy. Mexico, as noted, will not be immune to the impacts of the virus. Fatih Birol, Executive Director of the International Energy Agency, calls it a “free fall” for global oil demand. Indeed, Fitch Ratings projects demand for petroleum in Mexico to decline by 4.3% in 2020. But, it is highly likely that figure will be revised in the coming weeks and reflect further demand destruction for fuels in Mexico, particularly as the government slowly adapts more impactful and restrictive measures to combat the spread of the virus.

Other major markets where government action has been more severe, such as Argentina, have seen fuel demand fall as much as 70%. Global oil trader Vitol has seen gasoline demand drop by 50% in Europe and 35% in the United States, and their numbers indicate that, on a global scale, refiners have reduced throughput by seven million barrels a day with a further reduction of that same amount in the coming days.

These impacts have already seriously impacted the energy investment outlook. Companies across the region have accelerated investment cuts for 2020. Research firm Welligence estimates that the average reduction in investment across Latin America is 43%, far outpacing the global average. This surely translates to IOCs continuing to defer new investments in Mexico and calls into question the arrival of the major infrastructure investments that will be sorely needed when the economy revives.

Moreover, this will not, as the President has argued, be a boon to the Mexican consumer. Furthermore, when combined with another reversal of a major private investment in the country (Constellation brands Mexicali brewery) the aforementioned progress on fuels market development may not only be slowed this year, but could come to a screeching halt.

Based upon the rapidly evolving dynamics for the global oil sector and particularly downstream, the indicators are there that Mexico’s already dubious investment climate will deter investment and development that will be sorely needed when the world emerges from the current crisis.

But as the axiom goes, out of crisis, opportunity. In that vein, and for the other side of the current crisis, Mexico has the opportunity to take a major step to restart and enhance how it manages its fuels market. Since 1990, according to OPIS/IHS Markit, fuel demand has doubled while there has been little to no expansion of storage capacity by Pemex. These are the drivers for the interest in the fuels market and with each market cycle there are rebounds that policy makers must consider.

Mexico has the groundwork in place for a possible policy solution in line with energy sovereignty goals: creation of an autonomous body charged with ensuring open access to existing fuel infrastructure and capacity across Mexico.

Development of such a policy now for implementation as part of a recovery effort would allow the country to emerge with a clear-eyed view for optimizing the supply of refined products at the national level. Moreover, downstream experts note that the optimization would allow a project like Dos Bocas to have an optimal impact on the supply matrix. Quite simply, a variation of the model used in the natural gas system and managed with CENAGAS but instead focused on oil and fuels infrastructure.

Further, the President’s laudable commitment to budget austerity would be supported by relying on the commitments of the private sector to finance the recovery of the fuels sector to get the economy moving again without shortages or another gasolinazo.