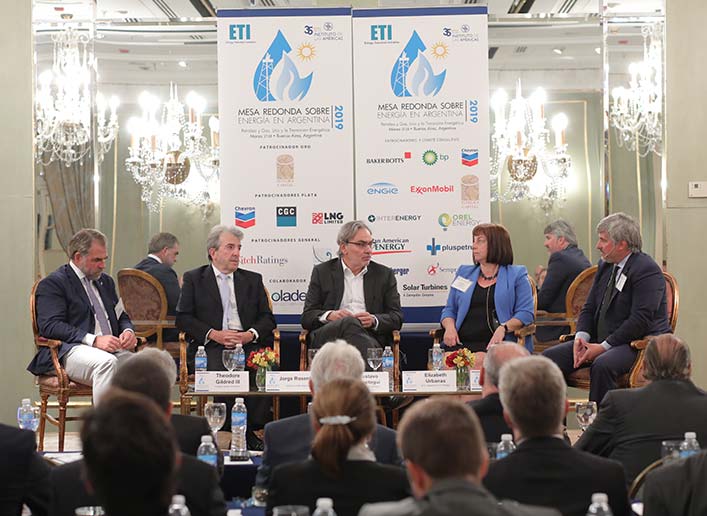 On March 27-28, the Institute of the Americas convened its annual Energy Roundtable in Buenos Aires with the participation of over 100 representatives from the federal, provincial and city government, regulators, industry, academia and civil society.

The two day Roundtable counted several high level panels and an intense discussion of oil and gas issues as well as the emerging role for the lithium market and the broader contours of how the global energy transition is unfolding in Argentina. A unique lunch panel featured a debate with renowned political analysts and their insights on the intersection of energy and politics as the country heads into a presidential election this October.

Not surprisingly, much of the discussion centered on the ongoing structural adjustments and reforms enacted by the Macri administration, particularly those aimed at subsidies and fiscal incentives both in terms of consumers but also energy producers.

Vaca Muerta and the country’s success in developing the massive unconventional resource potential was also heavily debated. Though important gains have been made to reduce logistical and operation costs, continued focus on efficiency measures and creating a more competitive ecosystem is a must, panelists underscored. There is no doubt that further efforts are required to boost the amount and capabilities of service and equipment providers, but also to greatly increase the number of operators in the country’s oil and gas sector.

Furthermore, how to create sufficient infrastructure to “move the molecules” remains a key piece to the challenge. Gains have been made utilizing long-inactive pipelines and infrastructure and reopening natural gas exchanges with Chile and Brazil in the short to medium term makes eminent good sense.

A majority of panelists agreed that the key to fully monetizing Vaca Muerta’s potential was to fully plug Argentina into the global liquefied natural gas (LNG) market. To do so will require all segments of the country’s energy sector to participate in the strategic development of the resource – the government, YPF, private sector participants, regulators and civil society. The technology, geography and volumes, not to mention contractual arrangements, are but a few of the elements that will require attention and crucial decisions in the coming months and years. Further, one panelist argued that political consensus and a law supported across party lines stipulating and protecting investment in such a major infrastructure project is needed to reduce the so-called country risk component.

Beyond the fiscal impacts debated, Argentina’s energy sector is also undergoing a broader transformation and disruption brought about by global trends. Indeed, the policy efforts aimed at increasing renewable energy deployment through the government’s RenovAr program was discussed. Panelists agreed that the effort to date had been important but a thorough cost benefit analysis was required in order to best consolidate and determine the gains and to continue forward momentum. Moreover, a new distributed generation law passed last year is being developed for implementation. Benchmarking against international examples from California to Germany to Chile were discussed during the Roundtable.

And, of course, the role that mobility and electric vehicles are playing in the discussion of energy and emissions reduction is an increasing topic for debate in Argentina. Programs and goals set by the City of Buenos Aires, but also efforts made at the provincial level, have led to an uptick over the last year or so in options for citizens to utilize electric transportation, both mass transit and individual vehicles.

Finally, the topic of lithium featured an illuminating discussion of the potential for Argentina to position itself as a global player. However, the market is still quite small, prices are volatile and the number of projects that exist solely on paper far exceeds the reality that global headlines portray for lithium. But as several panelists argued, therein is the opportunity for oil and gas companies to bring to bear financing and operational insights to the sector and perhaps facilitate some of the dormant projects and boost the development of Argentina’s lithium market.